Gluten-free pie crust has been a source of frustration and many a mediocre meal for my family since my husband cut wheat from his diet. But at last, I’ve finally … Read more 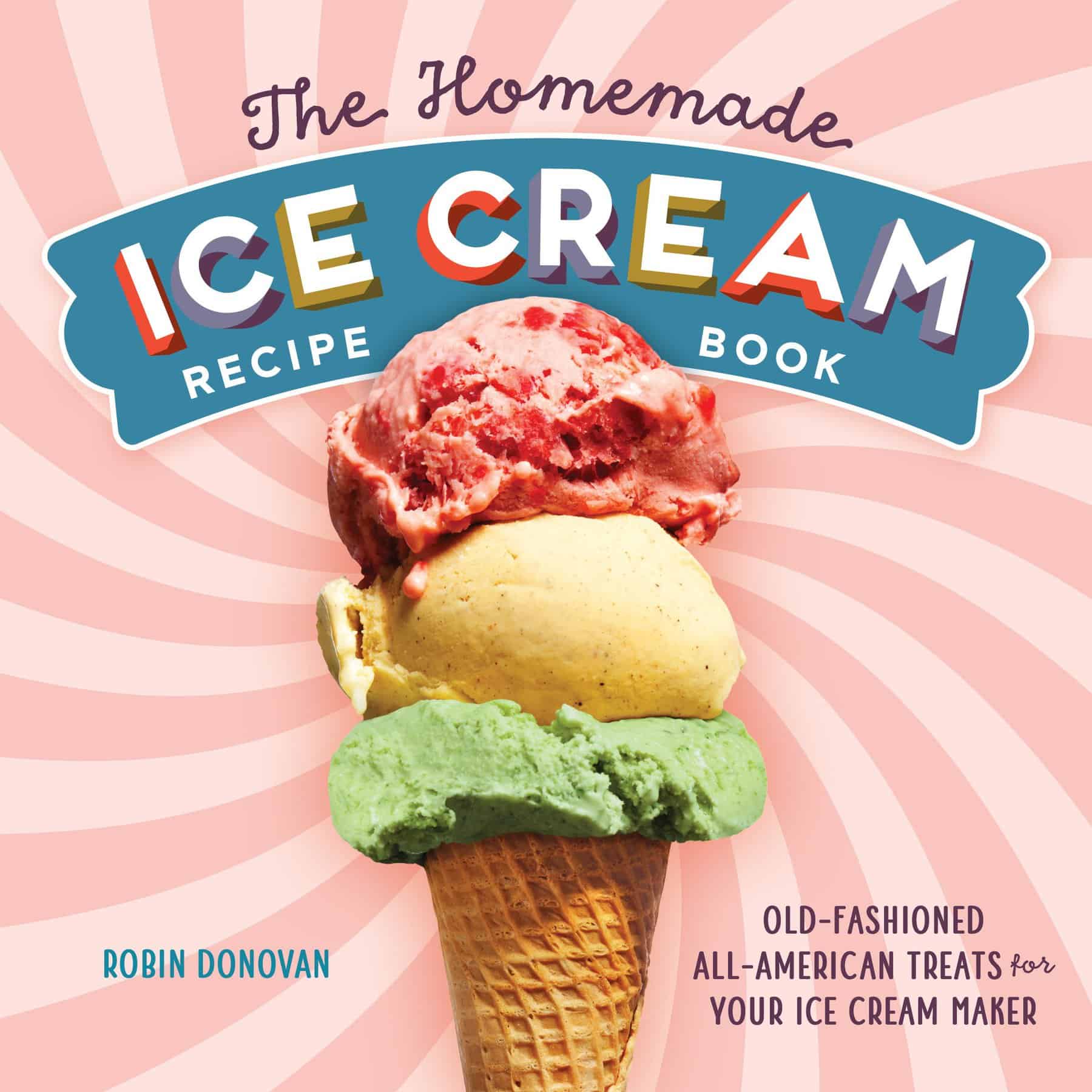 If you are looking for good, old-fashioned homemade ice cream recipes for your ice cream maker, you’re in luck. My latest book, The Homemade Ice Cream Recipe Book hit stores today and I couldn’t be more proud. Look at how cute it is! 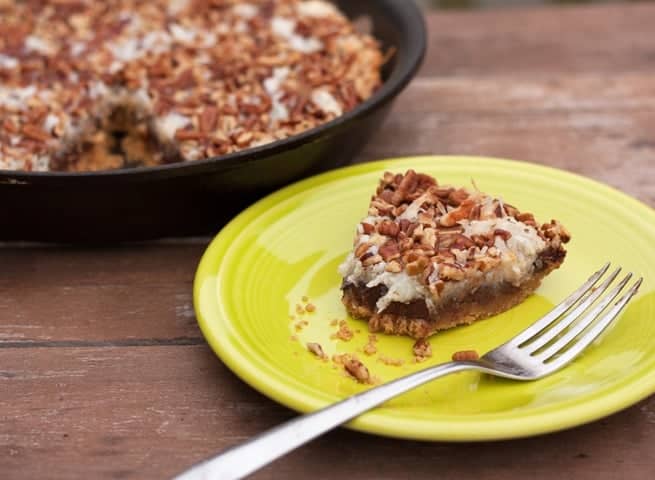 This Magic Layer Pie, which is adapted from the new, revised edition of my camping cookbook, Campfire Cuisine, is super easy to make—you just layer the ingredients into the pan and go—and only requires a frying pan, with a lid or foil to cover it, and a camp stove (it would work equally well on your stovetop at home). It’s sure to delight campers of all persuasions.

It’s officially camping season and all around me, throngs of outdoor adventurers are readying their camping gear and pondering whether to head for the mountains or the desert, the coast or the woods. Me? I’m already planning the menu. Don’t get me wrong, I love the outdoors as much as the next guy, but for me, the food is the highlight of any camping—or life—adventure. And that sentiment goes doubly for dessert.

There is just something deeply satisfying about sweet treats—gooey, toasty s’mores oozing with chocolate, fresh summer peaches baked over a fire with a rousing shot of rum, piping hot bananas baked with brown sugar and cinnamon—eaten under a sky lit up by millions of stars, breathing fresh air scented by tall trees, rich earth, and a crackling campfire.

What I’ve learned in my years of cooking at camp sites is that the food doesn’t need to be elaborate to delectable. This Magic Layer Pie is a perfect example. It’s a skillet-cooked version of that elementary school bake sale staple known as Seven-Layer Bars—layers of graham cracker crumbs, butter, sweetened condensed milk, chocolate chips, shredded coconut, and chopped pecans all baked together into oozy deliciousness. 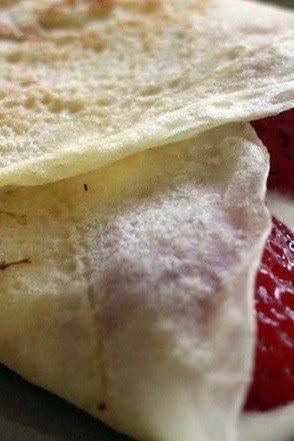 If you’ve been reading Two Lazy Gourmets for a while you might have noticed that I LOVE TO MAKE CREPES! (Ever since I got a new crepe pan for my birthday, I can’t stop making crepes.)

Yes, crepe-making is not necessarily a lazy process, but if you’ve never made them before you might be surprised by how simple the technique is. You can read how I do it here.

Today’s recipe is for dessert crepes, a change from my usual savory preference.

These dessert crepes with sweet, fresh filling are ridiculously easy and incredibly delicious.

The ricotta cream and strawberries can both be prepared in advance, to make time a breeze. Y

ou can fill and fold the crepes yourself or just set out the ingredients and let guests fix their own.

And, of , you can use any soft fruit in place of the strawberries (if the fruit is sweet enough you can skip the sugar step). 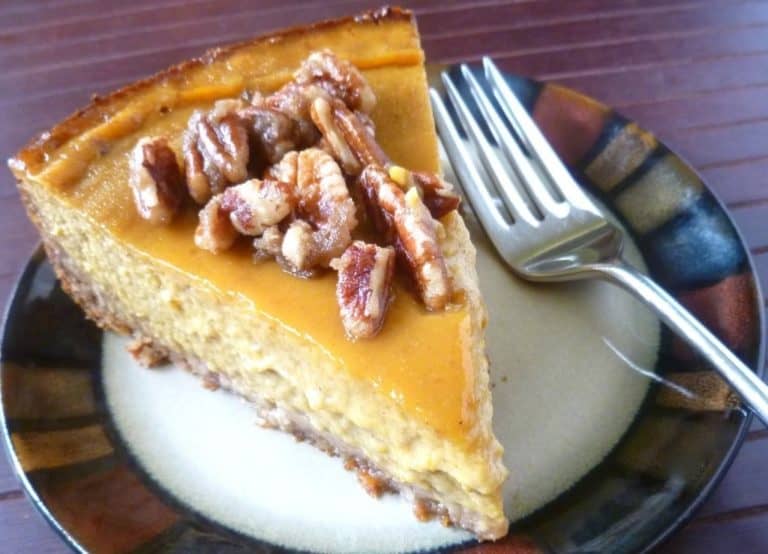 Last week we brought you a meatless entrée fit for the thanksgiving table, and today, I present a delectable gluten-free pumpkin pie. This easy Thanksgiving dessert is a stunning end … Read more

One of my favorite recipes in The Lazy Gourmet is this easy Orange Cake with Crème Fraîche and Bittersweet Chocolate Drizzle. I love that this beautiful and delicious orange cake can be mixed together with a spoon (no electric mixer!) in one bowl. Baked in a bundt pan and finished with a rich dark chocolate glaze (that, by the way, takes two minutes to make in the microwave), it’s a bajillion times easier than even your easiest frosted layer cake. In short, it’s a cake that even a devoted non-baker, such as myself, can really impress people with.

As if that weren’t enough, Juliana and I noticed another curious, and highly appealing thing about this cake when we were testing the recipe: Men (and boys) invariably went crazy for it. Husbands, fathers, step-fathers, brothers-in-law, sons, guys from the neighborhood—literally every male human who tasted it just went nuts over it. That is how it came to be known, in Lazy Gourmet Land, as “Man Cake.” 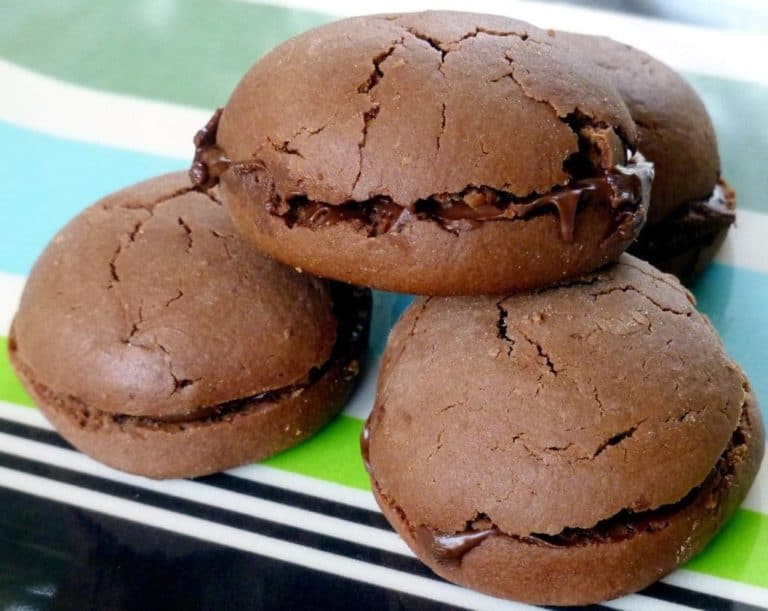 My husband walked in on me this morning and I was so embarrassed. There I was, standing at my kitchen counter, in front of the open cupboard, using a spoon to shovel Nutella right out of the container into my mouth. I can’t help myself. I have no self-control. I don’t normally keep Nutella in the house for this very reason, but after years of lusting after the stuff as a straight-up chocolate fix, I have recently discovered that you can cook with it, too, and had to buy a jar.

The recipe that tempted me came from Desserts 1-2-3: Deliciously Simple Three-Ingredient Recipes, by Rozanne Gold—a book that I’ve had for years but rarely used. The recipes in the book all have only three ingredients, which is an undeniably appealing concept for a Lazy Gourmet such as myself. And they all seem very clever, too, although often I wonder if they wouldn’t be just that much better with a few more ingredients added. But the other day, as I flipped through the book for the millionth time, this recipe that I somehow overlooked in previous reads nearly leapt off the page at me: Gianduia Sandwich Cookies. Gianduia is Italian for the chocolate-hazelnut paste commonly sold under the brand name Nutella. Here Nutella is a decidedly smart vehicle for getting the flavors of both chocolate and hazelnut into these rich, crunchy cookies while only using up one of the three allotted ingredient spots. 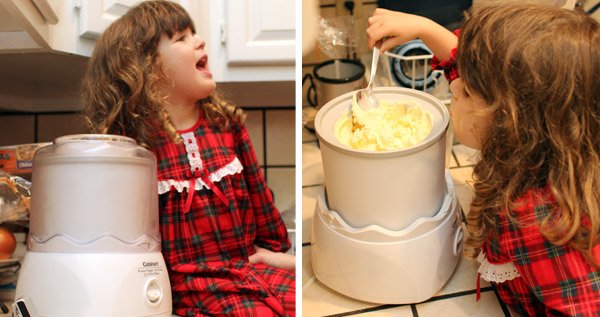 A few months ago, when my sweet little niece was around two-and-a-half, my mother and I took her to one of Mom’s favorite candy shops here in San Francisco. She marched straight to the tiny ice cream counter at back of the store and chirped, “Do you have mango?” The staff and other customers giggled at the miniature patron’s enthusiastic and slightly eccentric request.

Since one of my top goals in life is to create a belief system in my niece’s mind wherein I am a provider of all good things, I set out to make her mango ice cream dreams come true. It’s actually not all that hard a flavor to find in San Francisco, especially in the Asian neighborhoods, but since I love to make my own ice cream I thought it would be much more fun to enlist my tiny sous chef to help me make a batch from scratch. So this past December 23rd, the day my niece turned three, I brought my trusty ice cream maker over to her house, along with two ripe mangos, heavy cream, and a can of coconut milk. (A new but already cherished tradition in my family is to make a dinner of my niece’s favorite foods on the night of her birthday. The full menu, in case you’re wondering, included hot dogs, pomegranate seeds, roasted pumpkin seeds, and seaweed salad.)

The birthday girl had a great time pouring, stirring, and constantly tasting the pale orange mixture as it whirled and fluffed—and we all loved the smooth, creamy, fruity result. Seriously, no synthetically-flavored, artificially-colored, chemically-stabilized frozen dessert can stand up to pure, fresh, creamy homemade mango coconut ice cream. I wonder how this recipe would turn out with other soft, tropical fruits substituted for the mango—say bananas, or papaya. If you try it before I do, let me know how it goes!

If you’re a friend of mine, or a former co-worker, or just about any acquaintance I’ve dined with at a pot-luck party, there’s a very good chance you’ve tried my homemade ice cream.

And I’m not bragging, but you probably thought I was some sort of dessert genius. Thanks, but the only credit I can take for making the world’s richest, creamiest, freshest-tasting ice cream is that I had the smarts to buy myself an electric ice cream maker. Then I pressed a button.

A couple of holiday seasons ago I noticed this ice cream maker at a homewares store, along with Liz Franklin’s drool-inducing Ice Cream cookbook cleverly merchandised nearby. I became obsessed with both the contraption and the book (particularly the almond mascarpone ice cream on p.68).

Not being an impulsive shopper, I thought about both items for weeks, discussed the idea with friends, interviewed owners of ice cream makers, and even borrowed one for a while before making the commitment. (I had been warned by my very own coauthor that I might get bored of it after a few uses. Wrong! She was so inspired by my enthusiasm that we now both use our ice cream makers regularly.)

I haven’t regretted the purchase for a single minute.

Although I love getting out there with unconventional recipes like smooth, green, guest-stumping coconut avocado (recipe below, since now you’re probably curious), my favorite formula remains the simplest: a humble combination of heavy cream (2 cups), milk (1 cup), and sugar (3/4 cup).

Just whisk together, pour into the buckety part of the machine, press the button, and come back 25 to 30 minutes later for a pure, creamy delight unlike anything you’ll find at a typical supermarket.

I keep a batch in my freezer at all times and add fruit, Famous wafers, nuts, chocolate sauce, or nothing at all, as the mood strikes me. Hey, guess what… the mood is striking me right this very minute! See ya! 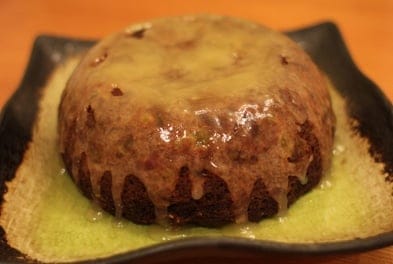 Persimmon Pudding Cake is rich and sweet. Its flavor comes mostly from Hachiya persimmons, along with a bit of sugar, vanilla, raisins, and pecans. Leafing through my recipe collection the … Read more