As a consumer of cookbooks, there is nothing that irks me more than cookbook recipes that don’t work. As a cookbook author, there’s nothing worse than discovering that one of your published has errors in it. Shortly after my latest book Home Skillet was released, I started getting emails mentioning errors in one recipe: Candied Ginger Peach Scones. Apparently, this is the recipe that everyone wanted to make, and it contained not one, but two errors.

The first tip-off that the recipe was off was that there were no peaches listed in the ingredients. The second, perhaps bigger problem was that the instructions said to bake the scones for 15 minutes, not nearly long enough. The correct baking time is 35 minutes. Additionally, there was some confusing language about how much cream to use when and how to handle the finished dough.

Readers also alerted me to a small error in another recipe. The recipe for Classic Wine-Braised Beef Stew with Vegetables was missing the oven temperature (350ºF). The book has been out for two months and no other errors have been discovered. I am confident that the rest of the recipes are correct as written.

I replied to the readers who contacted me as quickly as I could and notified my publisher right away. The good news is that the publisher assured me that they could fix the errors on the first reprint. And since they do frequent small print runs, this wouldn’t be too far off.  The bad news is that some readers got frustrated, and for I am truly sorry.

Following is a corrected version of the Candied Ginger Peach Scones recipe. The recipe is quick and easy to make. Candied, or crystallized, ginger lends intriguing flavor and sweet, juicy peaches keep the scones moist and balance the ginger’s kick. These are golden brown on the top with a crisp shell, thanks to the great heat-conduction abilities of cast iron. These are going to disappear quickly (hint: you might want to make 2 batches!) 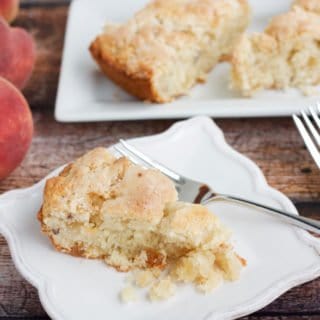 Robin Donovan
These scones are cooked in a cast iron skillet and they turn out super moist inside with a nice crunchy, golden brown exterior. If you don't have raw or turbinado sugar, feel free to substitute regular granulated sugar. This is a corrected version of a recipe that appeared with errors in the first print run of my book Home Skillet.
4.62 from 13 votes
Print Recipe Pin Recipe
Prep Time 15 mins
Cook Time 35 mins
Total Time 50 mins
Course Breakfast and Brunch
Cuisine American
Servings 8

Tried this recipe?Let us know how it was!