Crispy, crunchy, spicy, tangy, salty—these air fryer fried pickles are everything you want in a snack. And the best part is, you don’t have to mess up your kitchen them. Well, okay, the best part is YUM, but not having to spend an hour cleaning the kitchen is a serious bonus.

I only recently discovered fried pickles. I mean, I knew they existed, but didn’t have my first taste until just about a year ago. It was at a local bar/restaurant here in Berkeley, but I sort of assumed this dish had a Southern or Midwestern pedigree.

I mean, batter-fried pickles more Southern or Midwestern than Californian, doesn’t it? Turns out I was wrong, but more about that later.

Anyway, these fried pickles with ranch dressing were so good. I happened to have some vegan ranch (long story) and some buttermilk leftover from making Air Fryer Bang Bang Shrimp. And I had my air fryer out (because Bang Bang Shrimp).

So, obviously, you see where I’m going with this. I decided to create a recipe for air fryer fried pickles; an easy version of this delectable snack that I can have at home any time I want.

So where did fried pickles come from?

When I sat down to write this post, I started, as one does, by googling the history of fried pickles. This is the first thing I found (from Wikipedia):

“The first known printed fried pickle recipe was in the Oakland Tribune on November 19, 1962, for ‘French Fried Pickles,’ which called for using sweet pickle slices and pancake mix.”

Aside from the sweet pickle/pancake combo sounding … um … gross, that means that fried pickles originated in the same town where I was born.

Well, maybe that’s more exciting for me than for anyone else, but I don’t understand how I could go through so many years of my life unaware of this delicious treat when it was created in my home town.

Maybe sweet pickles coated in pancake mix weren’t such a huge hit after all. According to the same Wikipedia entry, “Fried dill pickles were popularized by Bernell “Fatman” Austin in 1963 at the Duchess Drive In located in Atkins, Arkansas.” So there you go.

Yes! Air fryer fried pickles are super easy to make. I’d argue that they are easier to make than traditional pickles—and there’s way less mess to clean up, too.

I dredged my dill pickle slices in flour first, then buttermilk mixed with hot sauce. Finally, I coated the pickle slices with a mixture of panko breadcrumbs and Parmesan cheese.

I popped them in the air fryer and ten minutes later I was munching away on crunchy, salty, spicy fried pickle rounds dunked into a zesty (vegan) ranch dressing. Yum.

Can you make these fried pickles ahead of time?

Yes! You can make a big batch of these fried pickles and store them in a resealable plastic bag in the refrigerator. Before serving, put them back in the air fryer and heat at 400ºF for about 3 minutes per side, until they’ve crisped up again. 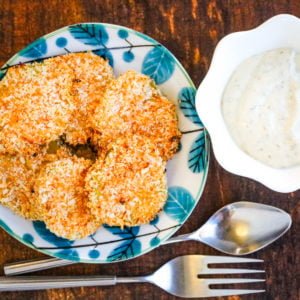 Robin Donovan
Crispy, crunchy, spicy, tangy, salty—these air fried pickles are everything you want in a snack. And the best part is, you don’t have to mess up your kitchen deep frying them.

1. If you don’t have buttermilk, you can substitute 2 large eggs whisked with the hot sauce. 2. I used Frank’s Red Hot Sauce because I am addicted to it, but you could use Crystal, Tabasco, sriracha, or whatever hot sauce you like. Or leave it out if you’re not into spicy.