This Instant Pot Bolognese sauce is so delicious it’s going to blow your mind. It uses just a handful of pantry ingredients. And it cooks in a fraction of the time a classic Bolognese sauce takes.

A while ago, a friend posted a recipe on Facebook for a meat sauce that she made. I was intrigued by the recipe because it used 4 onions for 1 pound of beef. It seemed like a lot of onions, but my friend said it was a big hit with her family.

Talk About Good by the Junior League of Lafayette, LA

The recipe came from a cookbook called Talk About Good, is published by the Junior League of Lafayette, Louisiana. It is a collection of recipes contributed by members of the Lafayette Junior League, their relatives, and friends.

Now if you’re from Louisiana, I’m guessing you already know about this book. It has a huge and devoted following.

As a native Californian, I’d never heard of it. But when I googled it, I found a ton of love for it and was curious. People LOVE this cookbook. And Louisianans know a little something about good food.

My copy came in the mail a few days later and it is a delightful tome full of recipes—many of which I can’t wait to try and, to be honest, some that I will certainly never attempt.

About that meat sauce for spaghetti…

But back to that spaghetti sauce I was talking about. I tried it, adapting it based on ingredients I had on hand. I also used the Instant Pot to cook it because I didn’t want to babysit it for 3 hours to cook it on the stovetop. The result was even better than I expected.

Like I said, the recipe calls for FOUR whole onions. That’s a lot of onions. But the sauce did not taste overly onion-y!

Between all those onions and a hearty portion of intensely concentrated tomato paste, this sauce is loaded with flavor.

And it has plenty of meat for my taste. The mushrooms add more meatiness, too. The best part is that it takes a fraction of the time that I used to spend on a good meat sauce.

What is spaghetti al Bolognese anyway?

That’s a hard question to answer, even for Italians.

The short answer is that ragu al Bolognese is a slow-cooked meat sauce made with tomatoes. But what makes the question tricky to answer is that in Italy, this sauce is served on thicker pastas like tagliatelle or on dumpling-shaped pastas like tortellini or gnocchi. Never on spaghetti.

That said, I serve it on spaghetti most of the time! Sometimes on penne, fusilli, or rotelle.

Can you really make a great Bolognese sauce in the Instant Pot?

I’m going to go out on a limb here and say yes. I know what you are thinking. Your Italian grandmother would roll over in her grave. An all-day simmer is required to make a delicious, complexly flavored meat sauce.

But it’s true. The Instant Pot turns out a rich, meaty sauce layered with flavor. I had to tweak the original recipe a bit, but the result is divine.

One thing to note is that tomato paste/sauce can sometimes burn in the Instant Pot. And the fact is that this sauce does burn a bit on the bottom of my pot.

But it’s okay! The flavor is still great (there’s no burned taste!) and after a little bit of a soak with hot water and a scrub with a scrubby sponge, the pot turns out good as new.

What ingredients do you need to make Instant Pot Bolognese sauce?

I love this recipe because it uses simple ingredients that I almost always have on hand.

How long does it take to make Instant Pot Bolognese sauce?

This pressure cooker meat sauce recipe is fast! No more spending 2, 3, or even 4 hours babysitting a pot on the stove.

Prep time for this sauce is about 20 minutes. This includes chopping onions, mincing garlic, slicing mushrooms, and opening a few cans. It also includes browning the meat and veg before putting them in the pressure cooker.

Including prep time, time for the pot to come to pressure, and pressure cooking, this sauce takes just about 1 ½ hours from start to finish. If you are a fast onion chopper or cut down on the pressure cooking time (45 minutes is okay), you could get it down to 1 ¼ hours pretty easily.

What to serve with this Instant Pot meat sauce?

I normally serve this sauce over spaghetti or other pasta. The sauce itself is gluten-free, so it’s a great topping for gluten-free pasta for my gluten-free husband.

For a low-carb meal, you could put it over zucchini noodles or spaghetti squash.

It also makes a great sauce for lasagna. I like to layer it with lasagna noodles, ricotta cheese, and chopped spinach.

No matter how you serve it, you need some of this delicious Garlic Cheese Bread on the side! 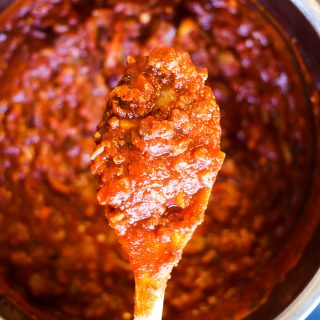 1. You can use a combination of beef and pork if you like. 2. I use a large skillet to brown the meat and saute the vegetables. You could do this directly in the instant pot, but I find it is easier to do it in a large skillet. 3. Store leftovers in the refrigerator for up to 3 days or in the freezer for up to 3 months.