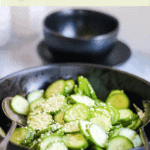 Japanese cucumber salad, called in Japanese, is a refreshing side dish that goes especially well with grilled fish and meat or spicy dishes. It is easy to make, light, and uses just a few ingredients.

What is sunomono made of?

What is Japanese cucumber?

Japanese cucumbers, called kyuri in Japanese, are thinner than English cucumbers and longer than Persian cucumbers. They generally do not contain seeds or have only very small, delicate seeds.

Can you use a different kind of cucumber to make sunomono?

Yes, you can use any cucumber you have access to. The best cucumbers for sunomono are the long, thin, seedless Japanese cucumbers, but you can substitute another type if those aren’t available.

Persian cucumbers are a good substitute because, like Japanese cucumbers, they have very few seeds and are thin with a tender outer skin.

English cucumbers will also work, but they tend to be more watery and have larger seeds, so you may want to halve them lengthwise and scoop out the seedy middle part before thinly slicing.

What ingredients are in Japanese cucumber salad?

How do you make sunomono?

What to serve with sunomono?

Japanese cucumber salad is a great side dish alongside grilled meat or fish. Because it is so light and refreshing, it goes especially well with heavier or spicier dishes. It’s also the perfect thing with onigiri.

Serve it as a side along with Shrimp Yakisoba, Beef Yakisoba, Karaage Chicken, or Mochiko Chicken. 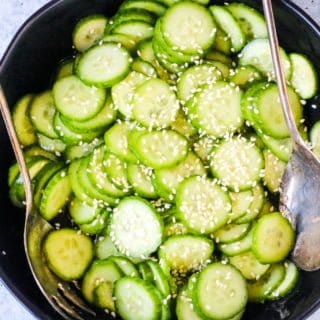