Pork and Shrimp Wonton Soup is my second favorite Chinese soup. I’ll tell you about my favorite later, but for now, let’s focus on this savory broth studded with juicy, flavorful homemade wontons. It’s a massively comforting, crazy delicious meal that can be on the table in under 30 minutes.

You might be thinking, “Whoa! Hold on there! I can’t make my own wontons!” And, while you are absolutely free to purchase frozen wontons for this soup, I guarantee you that you CAN make them. Not only that, but with my simple recipe and step-by-step instructions, you can easily master this culinary feat in mere!

And the wonton soup broth is even easier to make! You’ll just combine chicken broth with a few seasonings and cook shrimp and bok choy right in the broth.

I really love this homemade wonton soup, but as I mentioned before, it is not my number one favorite, but only because I think Hot and Sour Soup, my absolute fave, is the secret cure for the common cold (and also really delicious!)

Why you should make your own wontons and homemade wonton soup?

I am arguably not a typical home cook, so you might be skeptical when I say that making homemade wontons is not only worth the effort, but actually very easy. You’re just going to have to trust me on this: You can make your own wontons (and wonton soup!) in less time than it would take you to order take out and pick it up.

If you have an Asian supermarket nearby, you might be able to buy decent frozen wontons. But I’m telling you, these homemade pork and shrimp wontons are a thousand times better. And I would never lie about something this important.

I have posted this basic pork and shrimp wonton recipe before (try my Fried Pork and Shrimp Wontons or Air Fryer Wontons). I love wontons deep fried or air fried until they’re crunchy, but I also love wonton soup. Fortunately, the same wontons work just as well in this wonton soup recipe as fried!

I buy my wonton wrappers because the ones you buy from the store are pretty good and making them at home adds a lot of time and, frankly, they aren’t as consistent as store-bought. You can find wonton wrappers in most supermarkets, usually in the produce section or wherever they put the tofu.

What ingredients do you need to make this wonton soup recipe?

The ingredients for this pork and shrimp wonton soup recipe are easy to find in any supermarket. Here’s what you need (note that the complete recipe, with measurements and step-by-step instructions, is included at the bottom of this post):

How do you make pork and shrimp wonton soup?

It’s easy to make both the pork and shrimp wontons and the homemade wonton soup broth. Put them together for a quick, filling, and healthy meal. Here’s how (note that the complete recipe, with measurements and step-by-step instructions, is included at the bottom of this post):

How to serve this homemade wonton soup recipe?

I often serve this wonton soup as a full meal. It has everything you need: protein, starch, veggies. Or sometimes I serve it with Pork Fried Rice, Singapore Rice Noodles, Kung Pao Chicken, Szechuan Shrimp, Sweet and Sour Tofu, Salt and Pepper Chicken, or Air Fryer Salt and Pepper Tofu.

WHAT IS THE BEST WONTON WRAPPER TO BUY?

I have used a lot of different wonton wrappers and they have all worked well. My recommendation is to buy whatever wonton wrappers you can find easily in your supermarket. You’ll usually find the wonton wrappers in the produce section alongside the tofu. If you can’t find them there, try the freezer section or fresh pasta section.

HOW MANY WONTONS SHOULD YOU MAKE PER PERSON?

Cook 3 to 5 wontons per serving. For 4 servings, I usually cook around 16, but you should do more depending on how hungry your people are.

WHAT IF I WANT TO USE FROZEN WONTONS?

What can I substitute for the ground pork?

CAN I USE LOWER SODIUM SOY SAUCE?

What can I do with extra wontons?

You can freeze the extra wontons for another meal. Arrange the uncooked wontons in a single layer on a baking sheet and freeze. Once frozen, transfer them to a resealable plastic bag. They’ll keep in the freezer for 3 months. To cook them, drop the frozen wontons into boiling water. 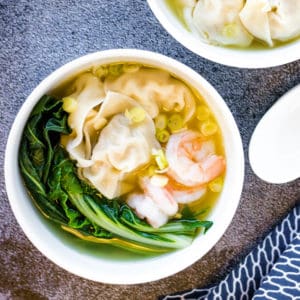 Robin Donovan
I cannot get enough of this savory broth studded with juicy, flavorful homemade wontons. It’s a massively comforting, crazy delicious meal that can be on the table in under 30 minutes.