You may have heard that the other day Chez Panisse celebrated its fortieth birthday. I grew up just a few blocks from the famed Berkeley restaurant and my first memory of it was right around the time it opened. It’s strange that I would even remember this, given that it was just a passing conversation between my parents that I, just five years old at the time, happened to overhear. At the time, there was no reason to think that this event was particularly significant.

What I remember is my mother saying excitedly to my father, “There’s a new French restaurant on Shattuck that we have to try. It’s a set three-course menu and it costs just four dollars a person!” Even in the early seventies, that was a deal. A week or two later, my parents made their first visit to Chez Panisse. My mother tells me they ate “some sort of chicken dish” that was “good, but honestly nothing special. It was the kind of thing I would have made at home.” My parents went to Chez Panisse a lot in those early days, but back then, it wasn’t the food that kept them coming back for more. “We really liked the price,” my mom says now with a laugh. Of course, as Alice Waters and her pals refined the restaurant’s cooking style and began cooking the exceptional food they are known for today, the restaurant grew in notoriety and the price tag grew to match. More importantly, over the ensuing years, Waters’ ideas about using fresh, seasonal, locally produced ingredients began slowly to change the way we eat, cook, and think about food—in my family, and in many others, as well.

By the mid-eighties, my mom had become a professional restaurant critic, claiming her own small role in the burgeoning Bay Area food scene, and had struck up a professional relationship with chef Paul Bertolli, who headed the Chez Panisse kitchen from 1982 to 1992. And so it was that my mom invited Bertolli and his wife to dinner, probably sometime around 1986.

While not a trained chef, my mom was (and still is) a fabulous cook. She doesn’t lack in kitchen skills, food knowledge, or palate sensibility. The only thing she lacks in the kitchen is confidence. So with a world-renowned chef from a world-renowned restaurant coming to dinner, well, suffice to say, my mom was in a bit of a tizzy. She spent weeks planning the menu and days shopping for ingredients. When the big day arrived, she was prepared, she had a plan, and she was working it. And then, of course, disaster struck. The story she tells me all these years later is that she had made a vegetable paté that was be draped decoratively with strips of roasted red bell peppers. Everything was going just fine. The paté had been made and turned out beautifully. The red bell peppers—which back then could only be found in the markets during the peak of summer, came gnarled and oddly shaped, and cost, as my mother would say, “an arm and a leg”—had been roasted in the oven until the skins blistered and blackened. But when my mom went to peel them, she couldn’t get the skins off the twisted flesh without the pieces completely falling apart. She had imagined the peppers a stunning cape for her velvety and refined paté and now they sat on her chopping block, a mangled mess of blood-red scrap.

Unable to bear the idea of wasting this small fortune’s worth of produce, she instead performed a bit of kitchen magic on the fly—tossing the peppers into a pot along with a diced onion, the kernels from an ear of corn, and some stock, simmering it for a good while, and then finishing it with a touch of balsamic vinegar and a few handfuls of freshly grated Parmesan cheese. A luxurious Roasted Red Pepper Soup was born.

She ladled the bright red concoction into soup bowls, topped each serving with a dollop of sour cream and a sprinkling of chives, and voila! The impromptu soup was so fantastic that even Bertolli was impressed. So impressed, in fact, that he called her a week or so later and asked if he could serve the soup in the restaurant. She said yes, of course, and shortly thereafter, the soup appeared on the restaurant’s menu as “Mrs. Donovan’s Roasted Red Pepper Soup.”

This soup, like Chez Panisse itself, is based on Alice Waters’ enduring rule of starting with high quality, seasonal, and fresh ingredients and treating them simply, allowing the raw ingredients’ best qualities to shine. Without a doubt, Chez Panisse, Alice Waters, Paul Bertolli, and all the other amazing chefs who have contributed to the restaurants success over the last forty years, have changed the way my mother and countless other home cooks approach meal preparation. My mother’s home cooking is proof of it. To this day, my mother still gets into a tizzy whenever anyone, let alone a world-renowned chef, is coming to dinner. And to this day, her kitchen magic never fails to impress. 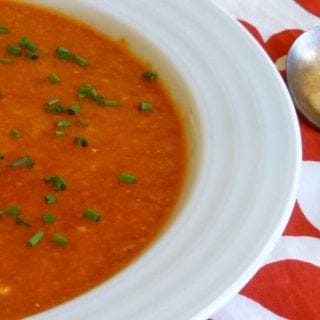 Robin Donovan
Equally delicious served hot or chilled, this bright soup is like late summer in a bowl. While red bell peppers can be had year-round these days, I highly recommend using only fresh, locally grown, ideally organic peppers and corn for this soup, and making it only during the height of the summer produce season. If you live in a hot climate and don't want to heat up your kitchen in the middle of summer, blacken the peppers on a hot grill instead.
5 from 1 vote
Print Recipe Pin Recipe
Course Soups and Stews
Cuisine American
Servings 6

Tried this recipe?Let us know how it was!
43 shares
By Robin Donovan on September 1st, 2011