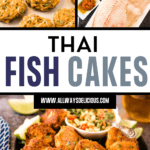 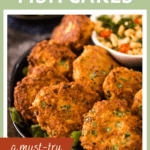 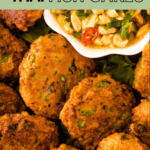 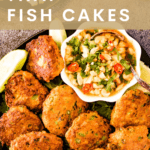 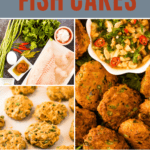 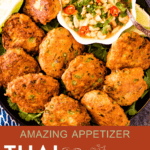 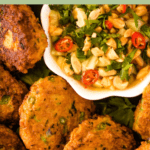 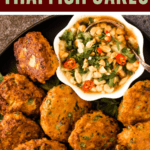 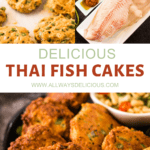 Tod Mun Pla, or Thai Fish Cakes, are loaded with the flavors of lemongrass, cilantro, and hot chiles. This recipe uses Thai curry paste, which provides layers of flavor without requiring a ton of ingredients.

When I eat at Thai restaurants, I always order tod mun pla. The savory Thai fish cakes are intensely flavored with all the Thai ingredients I love—lemongrass, cilantro, chiles, and fish sauce. But one order is never enough!

These Thai fish cakes are easy to make at home and they don’t even require a lot of special ingredients. You can shallow fry them in a regular skillet using just about ½ cup of oil rather than deep-frying them.

Tod Mun Pla are made with mild white fish that is ground to a paste along with seasonings including Thai curry paste, cilantro, and fish sauce. They are usually also studded with thinly sliced green beans for a bit of textural contrast.

If you love the flavors of Thai curries, you will love this easy Thai fish cakes recipe!

A lot of Thai cooking requires long lists of ingredients, but not this easy recipe! Here’s what you need:

How do you make them?

This tod mun pla recipe is surprisingly easy to make. Here are the steps:

What kind of fish should you use to make tod mun pla?

Cooks in Thailand use a specific type of starchy fish to make these fish cakes. The fish is beaten with wooden sticks to release the starch and give the fish cakes their classic springy texture. That type of fish isn’t available in the US, though. You can use any white fish as a substitute. I like to use catfish. You can also use tilapia, snapper, or cod. To create a similar springy texture to the authentic recipe, grind the fish to a paste in a food processor, adding an egg white.

What do you serve with Tod Mun Pla fish cakes?

In restaurants, you’ll usually see Tod Mun Pla or fish cakes as an appetizer. But when I make them at home, we usually have them as an entrée for dinner.
I offer Prik Nam Pla or a Sweet Thai Chili Dipping Sauce or store-bought Sweet Chili Sauce alongside, as well as steamed rice or sticky rice and a simple vegetable. In my house, more often than not, this means steamed broccoli.
The fish cakes are so flavorful that simple sides are all you need.

Thai curry paste is a mixture of chiles, herbs, garlic, shallots, galangal, and usually shrimp paste. You can keep curry paste in your refrigerator and always have the makings of a complexly flavored Thai meal at the ready.

There are many different types of Thai curry paste, but the ones you’ll see most often fall into the categories of red curry paste, green curry paste, and yellow curry paste. These all share some common ingredients but get their unique colors, along with different flavors and heat levels, by incorporating different ingredients.

Red curry paste, which is usually considered the hottest of the Thai curry pastes, gets its color from a base of dried red chiles. It also usually includes garlic, shallots, lemongrass, galangal, makrut lime leaves or zest, and shrimp paste.

Yellow curry paste is the mildest of the three. It uses yellow chiles as well as turmeric as a primary ingredient, which gives it a bright yellow color. Other ingredients include lemongrass, galangal, shallots, makrut lime peel, and spices like coriander seeds, cumin, cinnamon, mace, and cardamom.

What are the best brands of Thai curry paste?

If you have an Asian market nearby, you’ll probably find many choices of Thai curry pastes there. Two of the most common brands are Mae Ploy and Maesri.

Mae Ploy curry pastes come in a plastic tub, making it easy to tuck what you don’t use into your refrigerator for use in other recipes.

Maesri curry pastes come in cans, so you’ll have to transfer any extra to a jar or tub that is suitable for refrigerator storing.

I personally love Mae Ploy curry pastes because I find the packaging convenient and the flavors bright, spicy, and delicious. Both Mae Ploy and Maesri are good quality products that will deliver tons of flavor to your Thai cooking.

If you don’t have an Asian market nearby, you can still likely find Thai curry paste in a regular supermarket. The Thai Kitchen brand is widely available. This brand has good flavor, though it is much less spicy than either the Mae Ploy or Maesri brands or others that you’ll find in specialty markets.

What are makrut lime leaves?

Most Thai curry pastes that you can buy have makrut lime peel (often called kaffir lime peel, see below) in them. Many Thai recipes also call for makrut lime leaves. So what are they?

Makrut limes look like very bumpy limes. They are used for their zest or peels and the leaves of the tree are used as an herb in many Southeast Asian cuisines, similar to the way bay leaves are used in other cuisines.

The distinctive flavor of both the peel and zest is a common element in many Southeast Asian dishes. The flavor is bright and citrus-y. It also has a floral element that distinguishes it from the limes and lemons we are used to in the west.

The whole leaves can be purchased fresh or frozen. They can be tough to find in US markets, though, so whenever I see them, I buy a bunch and stock up.

I store the fresh ones in resealable plastic bags in the refrigerator (they last forever) or buy them frozen and keep them in the freezer.

You can also grow makrut limes in your own garden. Here in California, citrus is easy to grow and makrut lime trees are no different. The leaves can be harvested and used year-round.

For years, most recipe developers and writers in the West referred to this fruit as “kaffir lime.” Now it is becoming more common to call it “makrut lime.” It turns out that “kaffir” is a highly offensive racial slur in some parts of the world, so it’s time to stop using it.

According to an article on slate.com, “The Arabic word kafir was originally used to refer to non-Muslims, but over the centuries it was adopted by white colonialists to describe black Africans.”

Slate goes on to say that “By the 20th century, kaffir was widely understood to be a slur, and its power to insult and offend only grew in apartheid-era South Africa.”

Some have theorized that the name was used for this “ugly” fruit as an unfavorable comparison to black people.

But there is also an ethnic group in Sri Lanka known as Kaffir. And the name was used to refer to limes found in Sri Lanka in the late 19th century.

So the question is, is the name kaffir lime derived from the racial slur, or is the fruit named after Sri Lankan Kaffirs?

We’ll probably never know the answer. But because the word “kaffir” is offensive to some, we should all simply stop using it.

In Southeast Asia, the fruit is generally known by its proper name, Makrut lime, so let’s just call it that from now on!

1. You can use just about any white fish for this recipe. I’ve made it with both cod and catfish. Other options would be haddock, pollock, grouper, or snapper.

2. You can use either red or green Thai curry paste in this recipe, though red is more common. I love green curry paste, though, and think it works just as well in these fish cakes. I tested this recipe using Mae Ploy red curry paste and Mae Ploy green curry paste. One tablespoon of the red was plenty, while I found the green (which is less spicy) required 2 tablespoons to really pop the flavor.

3. Whichever type of curry paste you choose, be careful how much you use. The spice level can vary widely between brands, so start with a smaller amount if you are not used to very spicy food. I usually use Mae Ploy curry pastes, which are very spicy. If I use more than 1 or 2 tablespoons, it is too spicy for my family. Thai Kitchen brand is easy to find in supermarkets, and it is much milder. I would use at least 3 tablespoons of it.