Buttery Garlic Naan Bread is pillowy soft, chewy with crispy edges, and full of flavor. It’s perfect for sopping up delicious curry sauces and soups like Chicken Korma, Palak Paneer, and Chicken Curry Laksa. It’s also great on its own as a snack or for dunking into chutneys or sauces.

Naan is a pillowy soft flatbread from India. It’s traditionally cooked in a tandoor or clay oven. Traditionally, naan can be topped with butter, garlic, onions, coriander seeds, or topped or stuffed with cheese or sweet fruit-and-nut fillings.

You can get creative and top your naan bread with anything you like. Popular toppings I’ve seen lately include Za’atar seasoning mix, Everything but the Bagel seasoning mix, caramelized onions, or pesto.

Lots of people like to make them into Naan Pizza, using the naan in place of the standard pizza crust and topping it with traditional pizza toppings like tomato sauce, shredded mozzarella cheese, and pepperoni or veggies.

This Garlic Naan is topped with a savory garlic butter that makes it impossible to stop eating.

This Garlic Naan recipe uses basic pantry ingredients, and not even that many of them! Here’s what you need:

How to make it

What to serve with it

I like to serve Garlic Naan with Indian curries like Palak Paneer, Chicken Korma and Butter Chicken or with soups like Chicken Curry Laksa, Dal Soup or Mulligatawny.

It’s also great by itself as a snack or for dunking into sauces like Cilantro Mint Chutney, Cilantro Yogurt Chutney, Tamarind Chutney, Cucumber Raita, or spicy Zhoug Sauce.

Use it to scoop up Kachumber Salad. Serve Samosas, Air Fryer Samosas, Chicken Pakora, or Paneer Pakora alongside because they also go well with these dipping sauces!

If you’ve got leftover Garlic Naan, save it for making naan pizza the next day. To make the naan pizza, simply top with your favorite pizza sauce, cheese, and toppings and bake in the oven. 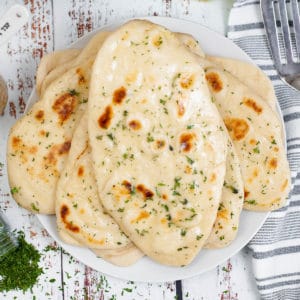 Robin Donovan
Butter Garlic Naan is pillow-y soft, perfectly crisp-chewy flatbread. It's easy to make and you'll love it alongside saucy curries or used as a dipper for chutney or raita, eaten on its own as a snack, or even used as a base for a naan pizza.
5 from 17 votes
Print Recipe Pin Recipe
Prep Time 15 mins
Cook Time 3 mins
Additional Time 2 hrs 25 mins
Total Time 2 hrs 43 mins
Course Baked Goods
Cuisine Indian
Calories 293 kcal