This is my favorite easy Hamentashen recipe. The cookies are crunchy, crumbly, just sweet enough. Shaped into triangles and filled with sweet poppy seed or fruit fillings, they’re a popular treat for the Jewish holiday of Purim. I love this oil-based dough because it is very easy to handle.

I feel like I’ve tried just about every hamentashen recipe out there, but this one is my all-time favorite. The dough, which uses oil instead of butter, is easy to handle and holds its shape well during baking.

These crunchy filled cookies are gorgeous to look at, especially if you use an assortment of fillings. Some of my favorite fillings to use with this hamentashen recipe include the very traditional poppy seed filling, strawberry jam, peach jam, or blackberry jelly. Nutella makes is a break from tradition, but a delicious one!

Purim is sort of a raucous Jewish holiday with a good story. This guy named Haman was King Ahaseurus of Persia’s top minister. This other guy, Mordecai (who happened to be Jewish), was also high ranking, but not as high Haman.

Mordecai thought Haman was full of it, so he dissed him and Haman got super pissed. But the king loved Mordecai because he had once saved the king’s life. In fact, the king ordered Haman to honor Mordecai for this good deed, which really ticked Haman off.

Haman got so mad that he concocted a plan to not only kill Mordecai, but to kill all of his people (the Jews). Knowing the king was partial to Mordecai, he made vague accusations about a group of dangerous people within the kingdom. And he convinced the king to sign an order to allow Haman to kill all of them.

But Queen Esther, who happened to be Mordecai’s niece/adopted daughter and also a Jew, found out about his plan. And she concocted a plot of her own to stop it.

Esther convinced the king to throw a party to “honor” Haman. Once the party was underway, she revealed, in dramatic fashion, that that she was Jewish. And also that she was the niece/adopted daughter of Mordecai. And finally, that Haman had tricked the king into approving Haman’s plan to kill all the Jews so that he could kill Mordecai.

In the end, the King had Haman executed. And guess who got Haman’s job? Yeah, obv. It was Mordecai.

I guess it’s a bit of grisly story. But it’s commemorated with much merry making, drinking, dressing in costumes (it’s sometimes referred to as the Jewish Halloween or the Jewish Mardis Gras), exchanging gifts of food, and eating these delicious filled triangle cookies!

Why is hamentashen triangular?

Have you ever heard the phrase “ask 2 Jews, get 3 answers?” We Jews love food symbolism, and we also love to debate all the possible interpretations of a thing. There are at least three different answers for the question of why hamentashen are triangular.

Some say the three-pointed cookies represent a three-pointed hat Haman wore. To take a bite out of Haman’s hat is to defy him and, well, to say screw you, Haman. We see your evil plan and we’re stopping it. But… did Haman wear a three-pointed hat? Who’s to say? There’s no mention of it in the original story.

Others say the cookies represent Haman’s ears that (trigger warning!) were cut off of his head before he was hanged. Apparently they used to do this in medieval Europe—cut off a man’s ears before they executed him. Whoa. That’s intense. And, um, gross.

Fruit jams and preserves, chocolate, and other fillings are also common these days but were introduced more recently.

When these cookies got popular as a Purim treat, apparently the rabbis felt they needed to provide symbolic meaning. In Hebrew, tash means “weakened.” So they said, well, we eat these cookies because Haman was weakened.  I mean, I guess I can see the logic, but I’m not buying it.

What makes this Easy hamantaschen recipe the best?

I love this recipe because the dough is super easy to handle. Most hamentashen dough is made with butter. While buttery dough is delicious, it can be hard to shape and handle.

This dough uses oil instead of butter. It is every bit as delicious as the buttery kind, but in my opinion, much easier  to deal with.

Using oil instead of butter also makes this recipe parve if that is important to you.

Vargebeles is another fun dessert for the holidays. It’s not a Jewish recipe, but it reminds me of noodle kugel!

What ingredients do you need to make this easy hamentashen recipe?

The ingredients for hamentashen are simple pantry ingredients, similar to any basic cookie recipe. You can use any type of jam or preserves for the filling, or use poppy seed filling. You can even use something like Nutella!

Here’s what you need:

How do you make it?

This hamentashen recipe is super easy to make. Because the dough uses oil instead of butter, it is much easier to handle than other the dough in other recipes.

It also means that you can make it in one bowl with nothing but a spoon or whisk for mixing. Here’s how:

These Hamantaschen are especially easy to make since the oil-based dough is so easy to handle. Here are a few more tricks to making perfect hamentashen: 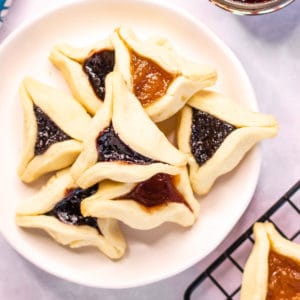 Robin Donovan
Hamentashen are crunchy, crumbly, just sweet enough triangle shaped cookies with a center filled with sweet poppy seed or fruit fillings. They're a popular treat on the Jewish holiday of Purim.