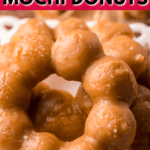 Mochi donuts are chewy on the inside with a light, crisp shell and a layer of sweet icing in a variety of flavors. This recipe includes a rich and perfectly sweetened brown butter glaze.

Mochi Donuts are a Japanese treat that is now sweeping the US the way cronuts, cruffins, duffins, and wonuts have previously. Invented in Japan, they’re also called pon de ring donuts, for their pretty ring of dough balls shape.

A big bonus of mochi donuts, though, is that they are naturally gluten free so they’re safe for the gluten-sensitive people in your life.

Where did mochi donuts come from?

Mochi donuts were first popularized in Japan by the chain Mister Donut as a hybrid between Japanese mochi treats and American donuts. Mister Donut started making a pon de ring donut using mochiko flour (aka glutinous rice flour or sweet rice flour) instead of the wheat flour we typically use in American donuts.

The dough balls are formed into a connected ring and deep fried, just like an American style donut, but with a chewier texture.

Yes, you can make mochi donuts at home

The longest line in San Francisco’s Japantown Mall is always at the mochi donut shop, Mochill. I’ve seen it stretch to 40 people or more. Are mochi donuts really worth waiting in such a long line for? Yes. Yes, they are.

But the good news is that you can make homemade mochi donuts that come really close to duplicating the deliciousness of store-bought mochi donuts.

Imagine biting into a perfectly chewy mochi ring with a light, crisp outer shell and a glaze of brown butter icing. It is totally irresistible. And you made it yourself so you know that when this batch is going, you can just make another one! Amazing.

This mochi donut recipe has a brown butter glaze, but you can switch it up with whatever flavors you like. Use a matcha powder to flavor a matcha glaze, fresh strawberries for a pretty pink strawberry glaze, black sesame seeds for a dramatic black sesame glaze, white chocolate or dark chocolate for a chocolate glaze, or any other glaze that sounds good to you.

Made with a combination of glutinous rice flour (also called sweet rice flour) and tapioca flour, mochi donuts have a chewy texture, similar to the regular mochi you find in Japanese markets. The dough is formed into dough balls about the size of a superball and connected into rings of about 8 dough balls.

Because they don’t have any wheat flour, they are naturally gluten free. My husband is sensitive to gluten so he loves that he can eat these without a problem.

You can make baked mochi donuts, too, but they won’t have the same

The ingredients you need to make mochi donuts

This mochi donuts recipe uses glutinous rice flour and tapioca starch instead of the regular flour used for typical American-style donuts. Some recipes include silken tofu, but these are even simpler than that. Here’s what you need (note that the full ingredient list with measurements is included in the recipe card below, along with detailed step-by-step cooking instructions):

Can I use regular rice flour to make mochi donuts?

Nope. You need to use glutinous rice flour to make mochi donuts. Regular rice flour won’t give them the addictive chewy texture that makes mochi donuts so special.

How to make Mochi donuts

Mochi donuts are easier to make than they look. Here’s how (note that detailed step-by-step instructions are included in the recipe card below):

How can I store mochi donuts?

Mochi donuts are best eaten the same day they are made. If you must, you can the store any remaining donuts uncovered at room temperature until the next day. 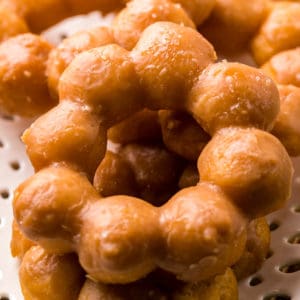 You can use any type of glaze you like. Some favorite flavors are matcha, earl grey tea, chocolate, white chocolate, mint chocolate, strawberry, black sesame seed, blueberry, etc.