Rocky Road Ice Cream is summer in a bowl. Cold, creamy, sweet, and silky chocolate ice cream is studded with mini marshmallows, toasty nuts, and chunks of chocolate for an explosion of texture and flavor.

I love making homemade ice cream. So much so that I wrote an entire book about it—The Homemade Ice Cream Recipe Book! I’ve got a recipe for a custard-based Rocky Road Ice Cream in the book, but this one is even simpler.

This Rocky Road Ice Cream is a mix-and-freeze version with sweetened condensed milk to give it substance in the absence of an egg-yolk-based custard.

Rocky Road Ice Cream is said to be the granddaddy of all mix-in ice creams! Believe it or not, before its invention in 1929, people didn’t even think for a second about mixing bits of crunchy, chunky, creamy, chewy delightfulness into their creamy ice creams.

Was it William Dreyer and Joseph Edy of Edy’s Grand Ice Cream who first thought to load their chocolate ice cream up with bits of chopped up marshmallows and nuts? According to the lore, they gave it the name because they wanted to give people “something to smile about” after the stock market crash of 1929.

Or was it Dryer’s and Edy’s good friend and candy maker George Farren of Fenton’s Creamery down the road, who hit on a bright idea to chop up his nuts-and-marshmallow chocolate bars and churn them into rich chocolate ice cream?

Farren says he told his buddies across town about the creation and they stole all the glory when their version of the new flavor became a national sensation.

I guess their friendship was pretty rocky after that, but the success of the new flavor paved the way for the many mix-in loaded ice cream flavors we enjoy today. Whether you like your ice cream chock full of nuts or cookie crumbs or chocolate chips, you have whoever invented Rocky Road Ice Cream to thank for it.

There are a million reasons to love this recipe. Here are just a few:

You only need simple ingredients to make this no-churn rocky road ice cream. Here’s what you need:

How to make it

It is so easy to make this no-churn Rocky Road Ice Cream, with or without an ice cream machine! Here’s how:

What about electric ice cream makers?

If you feel like you want to get an electric ice cream maker, I support that decision 100 percent! Here are my favorites:

For a basic model, the Cuisinart Electric Ice Cream Maker is a workhorse that won’t let you down. You do need to freeze the canister for at least 24 hour before use, though.

If you love making ice cream, you might want to spring for an ice cream maker with a built-in compressor (which means it has it’s own freezifying element built in!). This Whyntner Automatic Ice Cream Maker is a great option at a great price.

S’mores Ice Cream celebrates that most quintessential summer treat. If you’re still enjoying the warmth of summer but are craving the flavors of fall, try cinnamon-spiced Pumpkin Ice Cream.

If you want to be really decadent, you could use your Rocky Road Ice Cream to make Air Fryer Fried Ice Cream, or go ahead and use store-bought vanilla ice cream for this fun dessert. If air frying dessert is your thing, try air frying S’mores! 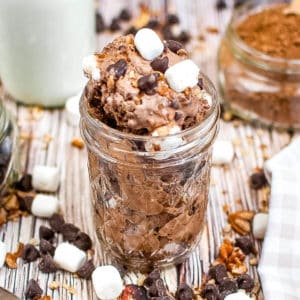 Robin Donovan
Cold, creamy, sweet, and silky chocolate ice cream is studded with mini marshmallows, toasty nuts, and chunks of chocolate for an explosion of texture and flavor.