Do you want to learn how to make tamales at home? They’re easier than you think, especially with my simple recipe and step-by-step guide.

You can fill them with whatever you like (chicken, meat, veggies, and/or cheese) and freeze a bunch for later.

I never really thought I would buy prepared food from a stranger on the internet—I mean, not a restaurant, but just a random person from Nextdoor.com—but last year, I found myself PMing with a woman who posted that she was selling homemade tamales for Christmas.

It kind of felt like doing a drug deal (not that I have personal experience with that). We negotiated the price, she asked which types I’d like and how many, and I sent her money via Paypal.

And then I crossed my fingers and hoped that in a few weeks, she’d show up on my doorstep with a few dozen homemade tamales. I planned to serve them to my family for Christmas Eve dinner.

The good news is that she did show up on my doorstep with exactly what I ordered. Actually, there’s even more good news: the tamales were delicious and my family loved them.

I planned to order from her again this year. But…. I lost her contact information. I forgot her name. The old PM conversation was no longer available in my Nextdoor.com history. So sad.

I was telling a friend about how there was a lady I was going to buy homemade tamales from, but I didn’t know who she was or how to find her.

And then we thought, hey wait a minute, why don’t we make them ourselves? We can make a giant batch and freeze them for Christmas!

You can learn how to make tamales step-by-step with this easy guide.

Tips for how to make tamales at home

We spent a weekend making a big batch of tamales with multiple fillings (vegan, vegetarian, and pork) and we learned a few things in the process:

• It’s not hard to make homemade tamales, but it does take time. It’s more fun if you do it with a friend. And wine.
• Make the fillings the day before you plan to make the tamales. So much easier when you start tamale-filling day with a clean kitchen.
• It’s all about the dough. We developed the tamale dough recipe below through much trial and error.
• Position the dough in the right place on the corn husk to make folding and tying easy. See the pictures for aid!

You can fill these homemade tamales with whatever fillings you like. We made a vegan version with chard, mushrooms, and caramelized onions; a vegetarian version with roasted butternut squash, green chilies, and queso fresco; and a pork version with a rich, homemade Red Chile Sauce.

By the time we finished making our tamales, we decided we were going to launch a cottage industry and make tamales to sell for next Christmas!

What are tamales made of?

Tamales are made of a dough made from finely ground cornmeal (masa harina) that is filled with meats, vegetables, and/or cheese, wrapped in corn husks or banana leaves, and steamed.

What Ingredients Do You Need to Make Tamales at Home?

There are just a few specialty ingredients you need to make homemade tamales.

With a few basic pantry items like vegetable shortening, baking powder, and salt, you are good to go.

So can you tell me how to make tamales?

Why do Mexicans eat tamales on Christmas?

There are a lot of different theories about this.

One is that Mesoamericans worshipped corn since it was such an important crop for their survival. They even belived that people were created from corn. Tamales wrapped in corn husks became incorporated into the rituals of the day.

The modern tradition of serving tamales on special occasions may be a holdover from those ancient rituals. Today they are served at weddings, baptisms, on Dia Del Los Muertos, and on Christmas.

Another theory holds that tamales represent the Virgin Mary holding baby Jesus, which is another reason tamales have become a traditional Christmas food. Sometimes a single olive is included in the filling of each tamale, which further represents the baby Jesus. 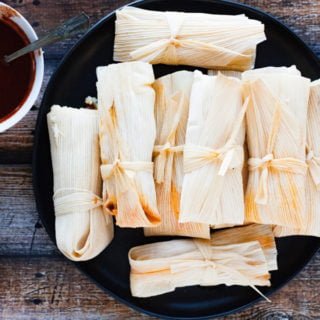 Robin Donovan
Tamales are surprisingly easy to make, but they do take time. Have all of your fillings and sauces ready ahead of time, crank up the tunes, and crack open a refreshing beverage of your choice and you'll be able to crank out a batch in about 45 minutes (plus steaming time).
4.80 from 5 votes
Print Recipe Pin Recipe
Prep Time 45 mins
Cook Time 40 mins
Total Time 1 hr 25 mins
Course Main Dish Recipes
Cuisine Mexican
Servings 18 tamales
Calories 211 kcal