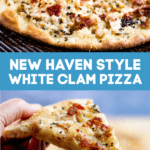 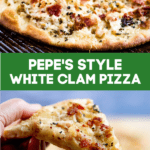 Pepe’s White Clam Pizza has been called the best thing to eat in Connecticut. I can’t argue with that statement. The thin crust is topped with a garlicky mix of fresh clams, grated pecorino cheese, and olive oil and then baked in the restaurant’s coal-fired pizza oven. And it is to die for.

For years before I ever went to Frank Pepe’s Pizzeria in New Haven, Connecticut, my husband (then boyfriend) had been telling me about their pizza. The best pizza in the world is what he told me. Being a California food snob, I didn’t really believe it. New Haven, what?

The first time we went to Pepe’s, it was winter. It was snowing. It was really, really cold for this Bay Area girl.

When arrived, there was a line outside. As we got in line, I said “This better be good if you’re making me wait outside in the freezing cold for it.” A lady in front of us in line turned around and said “Oh, it is, honey. It is.”

One bite and I knew she was not wrong. My husband was not wrong. Turns out, Pepe’s pizza is one of the few foods that I consider good enough to be worth waiting outside in the snow for.

The thin, Napolitana-style crust bubbles and chars in the coal-fired oven. In its original form, the “original tomato pie,” it gets a light shmear of rich tomato sauce and a sprinkling of shredded mozzarella cheese.

What made Frank Pepe’s pizza so famous?

The variation that originally put Frank Pepe on the map also had anchovies (the good kind, imported from Italy) on top. But you can get other toppings like pepperoni, sausage, mushrooms, peppers, even chopped broccoli, too.

The most famous pizza at Pepe’s though is the white clam pizza. Its topping is a savory mix of fresh littleneck clams, garlic, olive oil, and grated pecorino cheese.

Pepe’s was the first place I ever had pizza with clams. And in my opinion, it is the best New Haven clam pizza you’ll find.

Why is it called a white pizza?

Pepe’s white clam pizza has no tomato sauce. So it’s not red. It’s white. Get it?

As far as I know, Frank Pepe and Pepe’s Pizzeria have never revealed their exact recipe. This recipe is my interpretation of their delicious clam pizza.

Nothing will ever be as delicious as a white clam pizza hot out of Pepe’s nearly 100-year-old coal-fired pizza oven, but mine is pretty dang good.

True to their Southern Italian roots, Pepe’s uses only freshly grated Pecorino Romano cheese on their white clam pies. I like to use a combination of Pecorino Romano and Parmigiano Reggiano or Parmesan cheese.

I love the sharp bite and intense saltiness of Pecorino. And I love how the nutty undertones of the Parmesan round out the flavor, giving it depth. You can, of course, choose to use only Pecorino if you want to be true to Pepe’s recipe.

And then there’s the crust. We can’t know exactly how Pepe’s makes their thin, Napolitano-style pizza crust. Do your best to make a nice, thin crust that bubbles up around the edges in the oven.

What ingredients do you need to make Pepe’s white clam pizza recipe at home?

You don’t need a ton of ingredients to make a white pizza with clams:

Note: It seems like everyone who tries to recreate Pepe’s white clam pizza outside of New Haven insists on adding bacon to it. I’ve never had one with bacon at the actual restaurant—I don’t think they use bacon at all there. But what the heck, bacon and clams are a delicious combination! We tried it with bacon, and I can’t say I disapprove.

How do you make a white clam pizza?

Pepe’s white clam pizza is an easy pizza to make. Once you’ve made the dough, it’s just a matter of layering the ingredients on top and popping it in the oven.

What do you serve with white clam pizza?

For dessert, a visit to Libby’s Italian Pastry Shop down the block for cannoli is a required stop after a visit to Pepe’s. One of these days, I’ll do my best to recreate Libby’s amazing cannoli.

If you're using a pizza stone, you'll want to preheat it in the oven for an hour or so before cooking the pizzas.


More posts by this author.