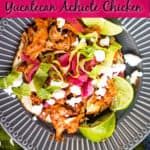 Pollo Pibil is a deeply flavorful dish from Mexico’s Yucatán Peninsula. With complex flavors of achiote paste (made from ground annatto seeds), sour orange juice, and spices, this chicken is full of flavor and rich orange color (from the achiote paste).

This post may contain affiliate links. As an Amazon Associate, I earn from qualifying purchases.

What is Pollo Pibil

All over the Yucatán Peninsula, you’ll find variations of this dish, including the more famous pork version called Cochinita Pibil or Puerco Pibil. The foundation of the dish is the combination of achiote paste and sour orange juice. The traditional method is to wrap the meat in banana leaves and roast it in a pit.

This version incorporates the flavors of Pibil. But since most of us probably don’t have a roasting pit in our backyards, I make my version in a pot on the stove or in an Instant Pot or other electric pressure cooker.

For this version, I wrap the meat in foil. The foil-wrapped meat cooks using steam heat (or pressure cooking). The meat essentially roasts inside the foil, but the steam provides a high-temperature environment that is also moist.

I use foil to wrap the chicken, but if you have access to banana leaves, I highly recommend adding a layer of banana leaves inside of the foil as they add flavor to the dish.

What ingredients do you need to make Pollo Pibil?

It’s amazing to me how few ingredients you need to make this Pollo Pibil. Just a few spices and seasonings are all it takes to give the chicken intense flavor.

How do you make it?

This Pollo Pibil is super easy to make. You can cook it in a stockpot or Dutch oven on the stovetop or in an Instant Pot or other Electric Pressure Cooker. Here’s how:

What do you serve with Pollo Pibil?

Let diners fill their own tacos with Pollo Pibil and top how they like. Offer cilantro, queso fresco or cotija, pickled red onions, pickled habanero pepper, sliced avocado or guacamole, and other toppings as desired.

What is achiote paste?

Achiote paste is a spice paste made of ground achiote seeds (or annatto seeds), which are a rich burnt orange color and nutty, earthy flavors. You can buy achiote paste (also called Recado Rojo) in small bricks in any Latin American grocery store, in some supermarkets, or buy achiote paste online.

What can I substitute for achiote paste?

If you can’t find achiote paste, you can make a substitute paste using 2 tablespoons paprika, 2 teaspoons turmeric, 1 teaspoon saffron, and 1 teaspoon ground cumin. This combination will give you a nice orange-y red color, and the spices will add some of the earthiness and nuttiness that you’ll lose by not adding achiote paste.

What is sour orange juice?

Sour orange juice comes from the Seville orange or bitter orange, which are distinguished by their bumpy peels and sour juice (sour oranges are only used for their juice rather than to eat like other fruit). You can buy bottled sour orange juice in Latin markets, some supermarkets, or buy sour orange juice online.

What can I substitute for sour orange juice?

If you don’t have sour orange juice, you can substitute a combination of citrus flavors. Mix regular orange juice with lime juice, lemon juice, and/or grapefruit juice. The flavor won’t be exactly the same, but will still be delicious!

Pollo Pibil is packed with lots of intense flavor, but it is not spicy as in hot spicy. It is tangy, earthy, a little sweet, and has flavors of spices like cumin and cinnamon or allspice. Because habanero peppers are a staple in Yucatecan cuisine, they are often served alongside Pollo Pibil or in a salsa meant to be added at the table, but the dish itself doesn’t have any hot chile peppers.

Can I cook the dish directly in a pot on the stovetop or in the oven?

You can cook this dish on the stovetop by putting the chicken and marinade into a Dutch oven or stockpot (without wrapping and steaming). Add a cup of water or broth to the pot with the chicken and simmer at very low temperature, covered, for 50 to 60 minutes.

Where can I buy banana leaves?

More posts by this author.