This simple Israeli Salad adds feta cheese and hard-boiled eggs to the traditional diced tomatoes, cucumbers, and fresh herbs. It is as delicious as it is authentic!

Israeli Salad was born on Israel’s kibbutzim (communal farms) where fresh salad ingredients were abundant. At it’s most basic, it is diced cucumbers and tomatoes in an olive oil and lemon juice dressing.

Wikipedia describes as “the most well-known national dish of Israel.” Way to go on the fame and recognition, Israeli Salad! You totally deserve it. You are sooooo good.

But last week, my cousin Nina, who once lived on a kibbutz, came to visit. We made this salad together while she was here, and she recommended adding either hard-boiled egg or feta cheese.

Nina specified either eggs or feta, but I insisted on adding both, because mmmm, eggs. And mmmm, feta.

Nina also adds whatever fresh herbs she has on hand. Parsley, cilantro, basil, parsley and mint are all popular choices (We used dill.)

Cucumbers are essential, but you can use either the large English cucumbers or the smaller Persian cucumbers.

Nina’s husband likes to add mayonnaise, which may sound odd for a Middle Eastern salad. But the resulting texture resembles Israeli salads made with the traditional white cheese similar to Quark.

Basically, just chuck in whatever you want. You can’t go wrong. Oh, and try it stuffed into some Homemade Pita Bread along with some Instant Pot Falafel! 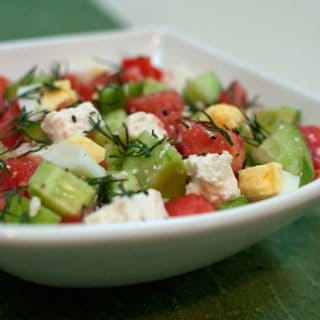 Tried this recipe?Let us know how it was!
70 shares

1 thought on “Israeli Salad with Egg and Feta Cheese”