This easy chicken quinoa salad recipe starts with chicken breast fillets marinated in apple cider vinegar and then grilled. While the chicken cooks, I prep the salad, tossing the cooked quinoa with the vegetables and vinaigrette.

This is a hearty meal-sized salad that’s full of healthy ingredients. Kale, quinoa, radishes, purple cabbage, crisp apples, raisins, and pinenuts are all tossed in a tangy and flavorful cumin-apple vinaigrette.

How to cook quinoa

The first trick to cooking perfect quinoa is to use double the amount of water as quinoa. Second, cook the quinoa with the pot uncovered. The cooking time varies depending on how large or small a batch you are cooking. A smaller quantity of quinoa will take less time to cook. Cook until the water is completely absorbed and then cover the pot and let it steam for about 5 minutes. 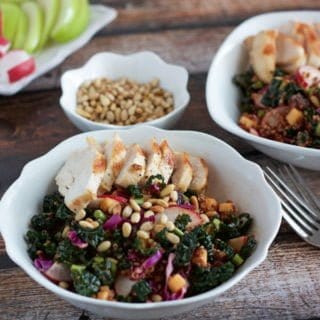 I used red quinoa, but you can use whatever type you have on hand. Do be sure to use lacinato (aka dinosaur) kale rather than the curly type, which isn't tender enough to serve raw.
5 from 3 votes
Print Recipe Pin Recipe
Prep Time 30 mins
Cook Time 20 mins
Total Time 50 mins
Course Salad Recipes
Cuisine American
Servings 4
Calories 418 kcal